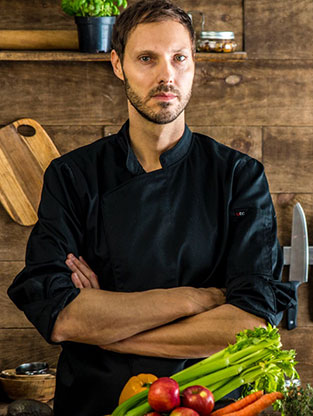 As a young chef, Jean-Philippe Cyr has a big mission: to introduce more and more people to the pleasures of vegan eating. A practising Buddhist for the past 20 years, he lives with his wife in rural Quebec and dedicates his time to creating simple and tasty vegan recipes for his website, The Buddhist Chef.

Childhood
Jean-Philippe remembers being drawn to the sights, sounds and smells of the kitchen at a very young age. As proof of his precocious culinary curiosity, a snapshot shows him at four years old, perched on the counter, using electric beaters to mix cake batter. Seeing his interest, his mom, an avid home cook, made sure to nourish his love of cooking throughout his childhood.

School & Work Experience
Long before he became a chef, it was clear to Jean-Philippe that his destiny would relate to food. His first foray into professional cooking was at a popular vegetarian eatery in Quebec City called Le Commensal. The food, atmosphere, philosophy felt like home to him, and it was here that he learned many of the principles of cooking, which he still applies in his own unique creations.

From that point, he attended the École hôtelière de la Capitale in Quebec City where he excelled in French cuisine and classic techniques.

After graduating from culinary school, Jean-Philippe apprenticed, among other establishments, at the acclaimed French restaurant Le Saint-Amour where the passion and rigour of its chefs inspired and guided him. He then continued to evolve as a chef and master cooking techniques in gourmet restaurants in Quebec, including The Capitole, a renowned dining establishment.

Becoming Vegan
His transition toward veganism happened progressively over several years. As he garnered more and more experience manning the kitchens in top dining spots, it became increasingly difficult for Jean-Philippe to reconcile his personal decision to eat plant-based food with his professional role as a chef creating menus whose star ingredient was often meat. Put simply, the more he prepared meat, the less he could stomach it.

Jean-Philippe’s discomfort finally reached boiling point one evening as he cooked for city dignitaries. On the menu: rack of lamb. Jean-Philippe was suddenly all too aware of the dozens of lambs butchered for the banquet, which, ironically, took place in a funeral home of all places. That night, he left the restaurant world for good and has not looked back since.

A Taste for the World
Jean-Philippe has always loved travelling. Having toured Europe and Southeast Asia (notably in Cambodia and Thailand), Jean-Philippe developed a taste for exotic flavours, recipes and techniques as he snuck into local kitchens for hands-on training from cooks willing to share their secrets. His love of vegetarian food was further fuelled by cooking classes in Bangkok.

Birth of the Buddhist Chef
It was at this point that, encouraged by his wife, Jean-Philippe decided to put his education, professional background and travel experience to good use and launch his own business. Thus was born The Buddhist Chef website featuring vegan recipes in print and video.

What sets Jean-Philippe apart from other chefs is his willingness to mix and match traditional techniques with cooking cultures from around the world. Spices, textures and flavours feed his passion for creating easy vegan recipes for all food lovers to enjoy. For instance, in his oven-baked butternut squash curry, he blends French savoir-faire with Thai-inspired ingredients, thus producing surprising flavour combinations. His recipes not only taste as good as their traditional counterparts, they bring them to a whole new level.

What the Future Has in Store for Jean-Philippe
Jean-Philippe has a lot on his plate: as the popularity of the recipes on his website and social media grows, he continues to push the boundaries of creative vegan cooking and entice more and more people to this healthy style of eating. He has begun work on his first cookbook, which he hopes to make available to fans in North American and Europe. His ultimate wish: to spread the word that it is possible to prepare outstanding dishes without animal products. What’s next on the Buddhist Chef’s menu? As always: easy, healthy and tasty vegan food!